Listen, I've done no running and very little physical activity of any kind lately so if the word 'Running' that occurs in title of this blog had you logging in hoping for some split time action forget it.

Although I do actually spend some of my time running I've never considered myself much of a runner (good job really considereing some of my non-achievements...I prefer that to 'failings').  I'll never be a runner and to be quite honest I have little time for runners. They tend to stand around in ridiculous clothes looking like they need a good meat pie. And all they do is yabber on about bastard running. Let's face it, as cave people we either ran after our food or ran away to avoid becoming someone else's food. We didn't need compression socks or stupid fucking sleeves to do that. Neither did we need to convene a meeting of the hungry gang to discuss the most efficient way to run up a 2% incline.

Anyway, now I've offended a very good percentage of my friends I'm kinda hoping that I might flush my anonymous contributor out from his/her hiding place and encourage another pearl of anonymously created wisdom.

If  'Anonymous's' calling me a tosser was based on the dual meaning of the hairy handed antics of a man that lives alone coupled with his or her distasteful opinion of me, that was very good. However, I doubt his or her consideration actually ploughed that deeply. Come on, 'Anonymous,' have another go. You do wonders for my hit counter, by the way.

Anyway, with no running stories to entertain you I'm drawn to my employment as one of those people in London that extinguishes fires (is that oblique enough to argue that I haven't actually mentioned I'm a fireman?).

However, I am disallowed to mention my employment in any detailed degree so I'm not in a position to regale you with the antics of the natives of SW11. What I might be permitted to say is that I was in Battersea the other night 'on business'and it was like a return to the old days. In recent times it's fair to say that Battersea has become something of an urban village. An area of Nappy Valley domiciled by city types and young professionals.

As a boy from Peckham I remember Battersea being considered a dark, frightening place that was dangerous to enter. And when I started my current career that perception hadn't changed greatly.

I first visited Battersea 'on business' as a fresh, green person-that-puts-out-fires back in 1992. My colleagues that were based at the far more salubrious Kingston were terrified to report to the three storey building on Este Road so I was sent instead. Those were the days when the local Battersea Belles shagged the fella that worked in the local kebab shop because they thought they were being Shirley Valentine-esque.

Or when the fellas all got faux dog tags made by the local cobbler and hoped for a random game of volleyball because they'd been so thoroughly affected by Top Gun. How they ever hoped to play ball games while being permanantly attached by rope to a snarling beast that would later fall foul of the Dangerous Dogs Act, God only knows.

Back then as you entered Este Road you were greeted by joy-ridden Ford Capris and dog fights.

Those days are now gone. Although, as I stated above, my last night in Battersea while 'on business' was a bit of a return to form. Yep, the never-quiet-silence of a Battersea night (the Ford Capris and Pitbull Terriers might be gone but the trains still shunt in and out of Clapham Junction throughout the hours of darkness) was pierced by a warring couple who were both desperate to rush the other to a hole in the ground. The screaming and hollering went on for at least an hour in a Vicky Pollard meets the Right Reverand Ian Paisley kinda stylee.

On convening in the morning in the room where meals are served my colleagues all looked bleary eyed and tired.

'Didn't you hear the screaming?' I was asked.

Of course I did. but to me it's a bit like being the guy that lives next to the motorway and never hears the traffic.

It's great to be back. 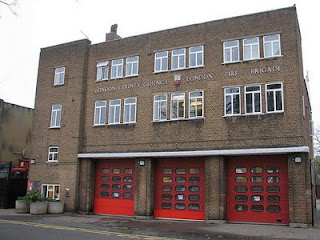 Posted by Subversive Runner at 18:10

I think Battersae is a jolly nice place. Me and Mason have great fun at Banana Park. xx

another good one..thanks Dave..ps returned from visit to Hadrians wall sites. have advised MtM that we should lobby for it to be rebuilt to its full glory...:-))

Ahhh, so that's what the building looks like where you are to be found when not out taming the natives of Battersea, or engaged in activities of a subversive nature, or maybe (when at a complete loss as to what else else to do) even out running.

I'll take a guess that "your" room is big the upper left hand one of three, with the open window, being the only one with an open window and a small taste of London's equivalent of best fresh air. And that the three windows going down the left hand side house that slippery pole thing that you guys slide down when in a hurry to get out on business.

Probably very wrong on both counts; hopefully you can advise on how wrong I am.