The Return of Vann the Man

You're not gonna believe this but I'm about to mention the 'R' word.

I was at the gym today and after having beasted myself to within an inch of my life (when I tell you this I have to say that I wasn't actually near death; but vomiting in one's own mouth while performing 'snake press ups' comes pretty close to the extreme end of physical exertion, right?) I got a text from my old pal and West Highland Way Race veteran, Jon Vann, which said:

Now when considered in a modern, electronically enabled communicative way, Jon might be regarded something of a Luddite. He doesn't do email; he thinks Facebook is an intellectual version of the 'pearl necklace'; and to him Tweeting is what the birds in his garden do just before he blats them with an air rifle for daring to approach his newly laid grass seed.

Despite being in receipt of a text that probably took Jon over twenty minutes to create, I replied quickly:

After I showered, applied moisturiser, dressed and brushed my hair (Hair? ha, ha, ha....I'll get there before you), I received a reply:

Jon and I need not specify a meeting place, as we always meet outside the Leg of Mutton and Cauliflower public house. Now, I always told people that this pub had the longest name for a hostelry in Britain. However, I recently discovered that I was talking bollocks because I came across the fantastically entitled 'The Old Thirteenth Cheshire Astley Volunteer Rifleman Corps Inn.' 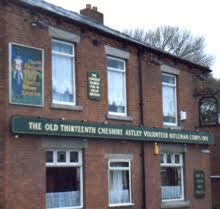 Long pub names matter not because The Leg of Mutton and Cauliflower is known locally as 'The Leg' and The Old Thirteenth Cheshire Astley Volunteer Rifleman Corps Inn is known in them parts as 'The Pub.'

But even expecting Jon to type 'The Leg' may have impacted negatively on the available time to make such a rendezvous on Saturday morning so I expected and received no reply.

This means that tomorrow I will be outside the Leg at 09:00 to meet Vann the Man and might even end up with a bloggable running tale. Whether I am or not I fully expect that every time that Jon and I are overtaken by a fitter and stronger runner, Jon will utter the words:

Posted by Subversive Runner at 22:57