Among the military fraternity there are individuals commonly known as 'Walts.' The term is a shortening of the name 'Walter Mitty,' the fantasising fictional character created by James Thurber, and refers to people, usually men, who create a military past for themselves involving deeds of derring-do. The basis for these individual histories can often be found in the scripts of our favourite war films or in one of Andy McNab's literary efforts. I know of one particularly sad fella that tells of red hot round casings falling down his collar from the chopper above that was firing on the approaching Taliban......yeah, pal we've seen Black Hawk Down too....I don't recall the bit in the film involving a bedding storeman and if there were one I don't suppose it would loosen the knicker elastic down the pub so effectively.

The term 'Walter Mitty' (and by association I guess, the British, monosyllabic shortening 'Walt') has now entered the American Heritage Dictionary and is described as: 'an ordinary, often ineffectual person who indulges in fantastic daydreams of personal triumphs...'

I now shamefully have to tell you that this past weekend I indulged in a bit of 'Walting' of my own. Don't get me wrong, I wasn't bigging up my own army career and winning a Military Cross for doing battle with a well-armed and determined enemy (although there was that time we had a bit of a dust up with the neighbouring regiment down the NAAFI); nope, I was a participant in the Hoka Highland Fling, a 53 mile trail race along the southern-most section of the West Highland Way.

The key word here is 'participant.' You see, I had flirted with the idea of my participant status involving standing on the start line alongside some of the great and good of the ultra running community. But in a rare attack of common sense I decided my lack of training might better prepare me for a support role (a bedding storeman, if you will).

An invitation for a sweeper runner was made public and Yours Truly leaped on the opportunity like a tramp on a biscuit. If you're not familiar with this particular role it involves setting off behind the back marker in a race and moving at a speed that will ideally result in crossing the finish line at the cut-off with the back marker just ahead. Often it involves cajoling and bullying said back marker into making some attempt to make forward progress. Depending upon the individual concerned, this cajoling and bullying might take a variety of routes. For instance, if that person is a lazy lard-bucket and general oxygen thief, or a particularly unattractive woman, it might be done thus:

'Come on Fatso, move yourself, there's a pub near the finish line with a pint on the bar with my name on it. If you actually get to the end without me doing the world a favour and leaving you here in a shallow grave I'll buy you a calorie-free slimline tonic.'

If, however, that person is tall, heavily muscled and liable to kick your arse at any given moment, or a very attractive woman, it's more likely to be:

'Well done, you're doing fantastically well, we're nearly there and there's a pub where I'll buy you beer for the rest of the evening and send you a friend request on Facebook.'

Anyway, the beauty of the invitation to sweep the Highland Fling is that I was to take over from another sweeper at Beinglas Farm. For those of you with limited familiarity of that particular part of a far away land where men wear skirts and women have a hierarchical system based on the number of their remaining teeth, Beinglas Farm is only thirteen miles from the end. Result.

Another result was that I was to be joined in my role by a fella called David Ross. Now David is tall, heavily muscled and liable to kick my arse at any given moment. You won't be surprised to learn that our friendship began with me buying him beer and sending a friend request on Facebook. David is running the 95 mile West Highland Way Race in June and this was to be a dabble on the route for him.

Anyway, after seeing my fellow blogger, runner and Irish pal, Richard Cronin, through at Beinglas Farm, David and I prepared to undertake our roles as sweeper runners. This involved David performing his own version of Man v Food in the pub where he chowed down on enough burger and chips to sustain a Third-World nation through a particularly long famine.

Then we were off.

And this is where the Walting came in.

The poor fella, feet in bits, exhausted having travelled forty-odd miles, honestly believed that David and I had swept from the start and were so supremely athletic that it appeared we had just started.

Who was I to shatter this illusion?

If he had stopped wittering on about all the races he'd done in the past (maybe he was the Walt,) two things might have happened:

1. He might have been able to put that energy into moving forward more quickly, thereby not keeping David and I out into the hours of darkness.

2. I might have got a word in and told him a story about being in Afghanistan and red hot shell casings falling down my collar...... 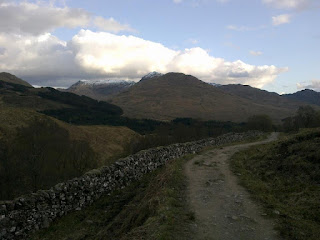 Posted by Subversive Runner at 11:38

I don't need to check to results to see who was holding up the rear. Ray's a legend. What an honour for guys x

Hi Davie great post, Although nothing wrong with us Stacker's lol

women have a hierarchical system based on the number of their remaining teeth..... lol lol lol .:-)

Brilliant as ever Dave. Sorry I missed you after the race, hope to catch up in June.

Hi,
I have a quick question about your blog, do you think you could email me?
David

Good blog post, nice efforts. It couldn't appear to have been penned any better. Reading this article piece of writing reminds me about my old boss! He usually kept babbling about this. I will email this post to him. Pretty confident he will probably have a high-quality read. Appreciate your posting!
HTTP://www.KneeNeckBackPain.com/