I've never been much of a prude. Never been one to consider the exhibiting of human flesh as something that might be considered offensive or embarrassing. If I seek to establish a history to this mindset I'm reminded of being a young boy and being inextricably drawn to the lingerie pages of my mum's Littlewoods catalogue. I didn't know why at the time, but skimming past the dodgy seventies clothing and the fishing tackle, to arrive at the Charlie's Angel-esque models in sheer bras and panties, gave me a bit of a thrill.

That thrill was probably fully realised when me and my pals found a carrier-bag full of discarded gentleman's magazines behind a bus stop in Camberwell some years later. We were like a gang of frontiersmen discovering gold and we made off with our bounty to my mate's house where his mum was out at work. We pored over the grubby mags in his bedroom and naively puzzled over what chemical reaction had occurred behind the bus stop to glue many of the pages together.

What surprised us most was the discovery that the beautiful women we were looking at had a little beard in a southernmost region. Of course, had these magazines been a modern equivalent, the Brazilian effect would have resulted in a less remarkable impact on us.

Not long after that I became a member of Her Majesty's Armed Forces where other members of the organisation seemed to rejoice in nudity. I think that the realisation that violent death was no respecter of privacy may have had something to do with that.

I suppose what I'm getting at is that we come into this world wearing a birthday suit and leave it in the same way. To my way of thinking there's no need to become abhorrently offended at the sight of a pair of boobs or a fella's meat and two veg and I know I'm not alone in this belief because Mike 'King of the Essex Underworld' Mason exposed his milky-white arse to me one summer's day in 2007. Don't get me wrong, Mike wasn't suggesting we get jiggy with a bit of sword-fighting action, he was merely making use of the outdoor facilities while we were running the West Highland Way Race in the same way that a woodland located bear might.

Why, oh why then, do grown men insist on hiding behind a towel to get changed at the gym? I even saw one fella last week who came out of the shower with two towels. One to dry himself and another that stayed clamped around his waste like a fucking kilt. And he only took it off once his trousers were on and his belt was fastened. I mean, what the fuck?

Experiencing individuals like this in the gym changing room causes me to be utterly overt in my nudity. I let the old fella dangle for as long as I possibly can. Socks on; tee shirt on; mince about a bit checking my phone and putting my training gear in my bag before my pants go on.

I haven't really got a punchline to this story so I'll finish with the realisation that, despite being told in the media that the creeping sexualisation of our young people is abound, it is in fact going the other way.

This week a member of the Jewish community in Stamford Hill complained that a Calvin Klein advert that showed a skimpily clad woman was offensive and inappropriate. The advert was for underwear by the way.

Sounds like a fair complaint to me. For anyone unfamiliar with this particular area of North London, if you ventured into it you might believe you've been dropped into downtown Jerusalem. A poster advertising skimpy underwear ain't gonna find many interested parties there.

Only problem is the complainant was offended by an advert on the side of a bus that happened to pass him or her.

Sheesh!!!!! I wonder what the young lads in Stamford Hill find dumped behind bus stops. 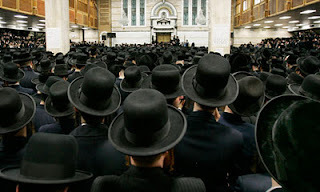 Posted by Subversive Runner at 21:09

I look forward to reading more of your articles and posts in the future, so I've bookmarked your blog. When I see good quality content, I like to share it with others. So I've created a backlink to your site. Thank you!…
Welcome to my blogger [url=http://registeredinvestmentadvisor.blogspot.com]registered advisor[/url].

Interesting comment, 'Anonymous,' thank you for taking the time.

I was worried where a blog of yours with this title might be going.... I now think it must be an attempt to fish for as many bizarre and inappropriate comments from Anonymous as you can get...!

Read this, and then had to read it aloud to Mrs J (and Shaz the lodger)... tears were streaming at the thought of you putting on socks and T-shirt, then checking your phone before covering block & tackle.
I confess, while it was funny, I also found it on the disturbing side - this is not an image I want to carry with me, and is likely to be the cause of a poor night's sleep, and an extreme loss of libido! Ugh!!!