The unpleasant events from my workplace that turned 2011 into my Annus Horribilis still echo here in the new year. I can't really comment but it seems that when the spotlight is shining your way it matters not whether you perform out of your skin or fuck up in monumental fashion. There's always someone wanting to metaphorically kick you in the bollocks.

But life goes on in SW11 regardless and my colleagues of the establishment on Este Road and our customers outside continue to provide plenty blog material. However, I need to approach this material in the same way I am reminded to approach the electrical sub-station down the road. It's a small, metal facility that buzzes like it's full of bees 24 hours a day. It's surrounded on all sides by a high,  wooden fence and a heavily padlocked gate. On said gate is a sign that simply says:

'Do Not Enter. Danger of Death.' 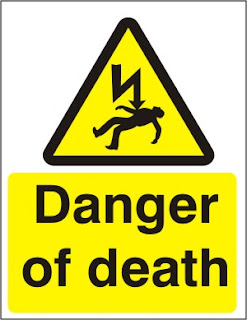 There is danger of death within much of the SW11 blogging material, hence it never seeing the light of day. But I've examined the following story I'm about to tell and I believe it to be 'Safe For Work.'

It concerns one of my colleagues who is not known for his sharpness of thought. Don't get me wrong, I like this fella immensely and believe him to be worth his weight in gold. Mainly because he keeps me entertained whenever we're on duty together.

Anyway, this particular fella is known to drag his feet when he walks. It's almost as if he has feet full of concrete. I lent him a pair of boxing boots once. They were nearly 25 years old and had seen many an outing in the ring. I got them back after he'd worn them once and he'd managed to rip the sole off of the left boot.

Anyway, my colleague's work shoes were beyond repair so two new pairs of slip on Doc Martens were ordered for him (slip ons preponderate in the fire-fighting business due to the ease with which they can be changed into fire boots).

Said shoes arrived and my colleague was chuffed to NAAFI breaks with his new delivery. He takes them up to the locker room and makes the schoolboy error of leaving both boxes unsecured on top of his foot locker. He ain't checked them yet.

Sometime later he decides to change his slick-soled, aged footwear for a shiny new pair of Docs. The new shoes go on and something's not quite right.

And so my colleague opens the second box and pulls out two right footed shoes.

'Bloody hell!!' How lucky is that!?' my colleague exclaims. The fact that the colleagues that switched his shoes are laughing their cocks off is lost on him as he marvels that the numpty shoe provider happened to send him two sets of same, but opposing, footed shoes.

I tell you this story not only because it's funny but also because shoe making companies MUST be selling single shoes.

Because I keep seeing young men wearing one shoe (or no shoes) in the town where I live.

Because these are returning amputee veterans from the war in Afghanistan. I saw two in McDonalds this week, both enjoying Big Macs without legs. I felt embarrassed to be wearing a faux army parka as I chowed down on a Quarter Pounder. As I chewed my food I explored (very quickly) the idea that I had earned the right to wear my coat due to my own military service.

Then I dismissed it without question as I rose to my feet and strode out of the restaurant.

I was gonna mention the short, bald, millionaire magician Paul Daniels (why did the lovely Debbie McGee marry him?) who likened himself to veterans of the Afghan war because he cut a pinky off or two.

Posted by Subversive Runner at 22:15