This summer the author of The Beirut Taxi wrote about temptation. This concerned Richard's battling with the temptation to end a punishing training run early. I've met temptation in that guise many times myself.

In fact I've never been one for avoiding temptation, while wearing running shoes or any other footwear. If it were me in the desert rather than Jesus, I'd have skipped off down the track with the Devil to partake in bastard hot curry, rice and chips to spend the rest of eternity stoking the fires of hell (like music, it's my contention that the Devil has all the best food). Yep, if it had been me there would have been no need for thirty nine of the scheduled forty days and nights and there would be no Christianity, no understanding of moral resistance and no bland-as-shit chicken korma.

My weak willed resistance to temptation was proven in February when I visited Battersea Dogs and Cats Home. My intention was to exploit the voluntary entry fee and the undoubted attraction of the doe-eyed homeless mutts that would give my youngest daughter an enjoyable but cheap day out. It was absolutely not to give one of those homeless mutts a home.

At the end of that day I left Battersea Dogs and Cats Home the owner of a Staffordshire Bull Terrier who occupies more than half of my bed and has a diet that's significantly healthier than mine.

I truly am a spiritual wimp.

Anyway, I've decided that the time has come to face the Devil and smite him. For the past six years I have entered and started the West Highland Way Race, it became a kind of raison d'etre. Six years of training (well, planning to....and then my old friend temptation encouraged me to do something far more enjoyable. Like eat kebabs and drink wine), six years of planning, and six years of playing the race-with-no-training lottery.

The entries are now open for what would be my seventh race and the temptation is strong.

But I must fight the urge to enter and demonstrate some willpower. My reasoning here is not personal as it concerns the well being of others.  You see my old mucker Martin Antoninus Horatio Hooper has entered and so has David Ross from Strathaven.

In a requitable act of selfless duty I am sworn to perform the role of back-up crew to two men that did the same for me in years gone by. To give in to temptation would be to place crewing responsibilities on others and leave Martin and David a person short.

The unofficial line is that between them Martin and David weigh the same as a small car. With the two of them running together I fear for any poorly constructed building in the near vicinity for the ground is sure to shake and tremor.

Neither man is built for distance running; both are about as incongruous on the start line of an ultra as Ann Widdecombe in a lap dancing club. This is where my skill and experience come in. I know the West Highland Way like the back of my hand and am a trained search and rescue technician.

Ok, so if one or both collapse while running it's unlikely that their considerable bulk will be covered by a windfall of leaves (a mixer-truck delivery of cement might just do it) but if they do go down I'll be able to find them. Admittedly the detail of my strategy for extracting them to civilisation has yet to be worked out but I'm working on the idea of a Chinook with up-rated winch.

The issue of temptation is one that effects not just myself in this sordid tale of ambition and ability. Both Martin and David will have to fight off the ever-present temptation of pies. 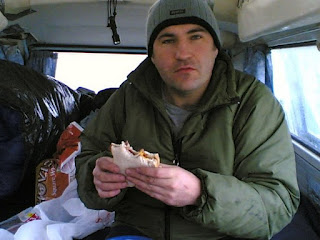 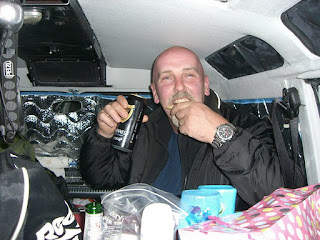 Posted by Subversive Runner at 15:29

Nightmare. And you expect me to accept these entries? :-) Ian

Just kidding Dave, but you don't need to accept this comment