Without compromising the policy on the use of social networking media of a particular self regulatory, autocratic organisation I ought to be able to tell you with some degree of safety that my head has been well and truly up my arse for the past two weeks.

I consider myself to be a resilient, calm-under-pressure kind of guy. There are many examples I could give you that would illustrate this but I'll refer you to my comment above regarding the policy of a particular self regulatory, autocratic organisation. So instead I'll remember back to my infamous flying of the Jolly Roger flag from my house, a story that was well documented within this blog, now sadly no more. Luckily, however, I have the attached memory saved among the pictures on my hard drive: 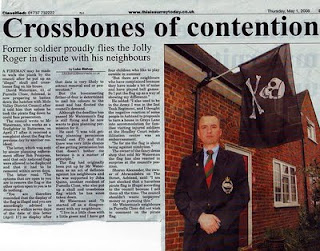 It was on the day that the BBC arrived at my house, complete with massive truck adorned with aerials and satellite dishes and a mobile make up studio, to make a filmed report of my crime detailed in the newspaper report above. The researcher had skipped off down to Sharon Alexander's shop in the village to ask her to appear with an array of different national flags. Sharon owns Abracadabra, the local fancy dress shop, and was the purveyor of the £5.00 Jolly Roger you can see in the picture.

Sharon duly arrived with a dozen or so brightly coloured flags of different nations from her shop with the intention that it might be demonstrated that I could fly any one of the flags in her possession, but not the Jolly Roger that was Gaffa taped to my house.

'Bloody Hell, Dave!' exclaimed Sharon. 'When I sold you the flag I would never have dreamed it would have come to this. I've got to say that you don't scare easily.'

And the point I'm trying to make is exactly that. Usually I don't scare easily.

But a week ago I felt fear. I was scared.

More scared than when I re-entered the competitive boxing ring after an absence of nearly twenty years to fight a hard bastard from Portsmouth nearly half my age on an unlicensed boxing show. In Portsmouth.

So what scared me so?

It was the prospect of facing the embarrassment and emasculation of unemployment for exercising my right to free thought and free speech.

It's taken two weeks but I'm not scared anymore.

Not because the threat is now removed. It remains a very clear and present danger. But because I've had the time and I've had the support of the person closest to me to get my head out of my arse.

Yep, my head is now clear of my sphincter and I can clearly see how this matter ought to turn out.

I am happy to answer for my actions. I accept that I work for a disciplined outfit and indeed I myself insist upon discipline within my own sphere of influence. If anyone abuses that they answer to me. I am now the one under scrutiny and welcome the due process, providing it's balanced, fair and just.

If it's not then I have only my dignity to fall back on. I swear that in the worst case scenario I will turn around and march out of that office without moan or whimper.

I might get shit faced very shortly after, right enough, but what's new there?

Posted by Subversive Runner at 21:34

Being scared is a completly normal reaction. It shows just how much it means to you and proves you are human just like the rest of us. I've got your back, every step of the way.
Dont forget xox

So you are normal like rest of us? Seriously though Dave, i hope all works out ok for you,take this time out to get that training cranked up to take your mind off bad stuff
x

...and the Dread Pirate is back.

All the best Dude.

As the song goes: 'Lets face the music and dance'.

Street Legal, Changing of the Guards, v8. Hang in there Dave, hope it works out right.