How time flies. It seems only yesterday that the disappointment of West Highland Way Race was a very live memory but in fact it's been eight weeks since that 84 mile run. The eight week time frame, although not apparent in casual thought, is proven when I look at the figure '84' and wonder 'could I have pushed it and finished the race?' Like child birth, the pain and suffering of that experiencing is waning with time.

But my intention here is not to torture myself but to examine how one's body and fitness can deteriorate over 8 weeks. Without a real goal to aim for (Glen Ogle, Glenmore 24 and the River Ayr Way are all possibilities, but having taken all my leave at work I'm waiting to see the outcome of the Fire Brigade Union's ballot for industrial action and whether any strike action will coincide with any of those races) I've pretty much been idle for eight weeks.

Enter former professional footballer and ultra runner, Stephen Tennant and a request to make up numbers in his team to tackle the Commando Shuffle in four week's time. The Commando Shuffle is a 30 mile race against the clock on Dartmoor following the route of the Royal Marines recruits' final test while carrying 35lb of kit. It happens that, strike action or not, the date fits with my time off so I needed little encouragement to answer yes.

All I need to do now is get my body ready for such an undertaking. Not too difficult a task, after all it's only 30 miles and I own a body that was pushed through 84 miles of the Scottish Highlands only.......eight weeks ago.

So training session one was a five mile run along Old Father Thames before work. Just to get my limbs, heart and lungs working again. Hmm....the struggle I encountered there was obviously down to my recent back injury and the polluted atmosphere of London.

Training session two was a pliometrics session at the gym of squat jumps, lunges, box jumps and bridges. Hmm....the struggle I encountered there was obviously down to the stuffy air of the gym and tiredness following two night shifts.

Training session three was a speed session of four miles on the treadmill. Hmm....the struggle I encountered there was obviously down to the accumulated effect of training sessions one and two.

As I ponder today's training session number four I've decided to stop kidding myself and accept that eight weeks of sitting on my ever expanding arse has had a detrimental but understandable effect on my fitness and fuck all to do with pollution, tiredness and all that other stuff.

Anyway, I reckon I can execute a reasonable four week training programme to put me on the start line of the race with a more than good chance of finishing. What else have I got going in my favour? Well, in 1996 I did a similar race on Dartmoor with five colleagues and recorded a third place finish from 60 teams; probably my finest achievement in the ultra field ever. I'm also familiar with this type of event having done similar in the army and am a demon map and compass user.

﻿ Mrs Mac might take me to task with that final statement and remind me of the time in Dundee when, after leaving a Jake Bugg gig, we disagreed about the route back to the hotel. Cue a spit in the palm, a handshake, and a race back to said hotel along our chosen routes and Mrs Mac was sipping wine in our room while I was lost somewhere down by the docks.

But I scored a return goal in the navigation stakes when we were in Dublin last week. We had eaten an early dinner in a traditional Irish restaurant on Temple Bar and left to make our way to Whelan's, the location for the pub scene in 'PS I Love You' and the gaff where the Los Angeles based indie folk band, Lord Huron were playing that night. I'd checked the place on a map and had a reasonable, alcohol unaffected idea of how to get there: pretty much a dog leg then a straight road would see us in Whelan's in about 15 minutes.

Mrs Mac preferred a more modern approach and decided to follow an electronic arrow on the GPS on her smart phone. Being a modern kind of guy myself I capitulated to the female insistence and followed her as the GPS directed us here and there down alleys and along back roads. It was as we were following this convoluted route that we entered a housing estate and my south London street wisdom sparked some concern. In the distance was a large group of bored looking teenagers hanging all over the pavement and we were headed directly for them. Meanwhile Mrs Mac was lost in the electronic map in front of her completely unaware of her surroundings. Now, I'm not saying this group were particularly nefarious, but if you lived in a rundown manor and were given to relieving clueless travellers of their possessions, a gift was right there in the hand of an approaching tall Scottish burd.

'Put your phone away,' I said.

'No, we're nearly there now, it's just up here and round the corner,' answered Mrs Mac.

'Put your phone away now or you're gonna lose it.'

Mrs Mac looked up and saw the group of kids in front of us who were now quite interested in the pair of foolish tourists who had entered their territory.

There was nothing for it but to confidently bowl straight through the group and hope their desperation hadn't descended to a place where confrontation was an attractive concept.

Laughter and abuse were thrown our way as we passed and an urge to throw my hands about prickled but was kept in check in equal measure by maturity and a desire to avoid the inside of a Garda Siochana station.

Whelan's was indeed just up there and round the corner and we arrived without too much incident. The gig was excellent and the venue everything we'd hoped for but when we left we used my inbuilt compass rather than Mrs Mac's smart phone to get back. 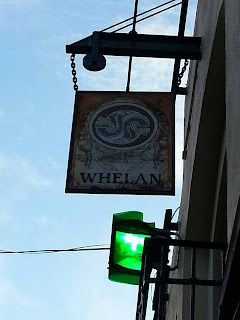 Anyway, I got here by speaking about the effect of eight weeks abstinence from exercise and I've just spent another half an hour or so tip-tapping away on this blog and avoiding the gym, so I'm off for a mixed treadmill and pliometrics session.
Laters.

Posted by Subversive Runner at 12:45

You are wasted on the fire brigade my dear. You are such a good story teller ;-)

You are wasted on the fire brigade my dear. you are such a good story teller ;-)