King For a Day

In terms of a return on my investment I feel a bit cheated.

I'm talking about the volume of training I've committed to since before Christmas and my resulting performance at the D33. Admittedly with hindsight I would run the race differently ie employ my usual race plan of running off like a loon, keep going until I've proven my ambition completely outweighs my ability, then breathing through my arse and hanging on til the finish. I honestly believe this strategy might have paid greater dividends in that race.

I've employed a similar technique in other areas of my life with some success. For instance I'm reminded of a monthly budgeting strategy I once employed, something I called the 'Live In the Moment System of Money Management.' It involved being paid at the beginning of the month then eating fine foods from quality restaurants and drinking fine wines til I fell over. Lots and lots of fine wines. Getting to and from said restaurants involved hailing a fast black and tipping the driver generously. As a single man this lifestyle ensured for a successful love life between the first and fourth days of each month.

Such excesses were balanced by the remaining 26-27 days where nutritional needs were met with tins of spaghetti hoops; any desire for an alcoholic beverage involved considering the ABV percentage of my after shave; and carnal needs were taken care of by Madam Palm and her five sisters. What you should see here is an enforced balance. If my life were lived according to the model demonstrated on days one to four I would surely burn out like some South London based Jimi Hendrix (or Jim Morrisson, Sid Vicious, Elvis Presley, Amy Winehouse....you get the idea). Whereas if I were to extend the restraint shown in model two throughout the month I would be guilty of failing to enjoy the gifts of life and may as well fuck off and live in a cave.

As I said earlier, this budgetary strategy was one I called the 'Live in the Moment System of Money Management' and it was one that I employed for some considerable time....until an old Guv'nor of mine highlighted it's pitfalls and renamed if the 'King for a Day, C*nt for a Month' method.

Since then I've become considerably more sensible and have attempted to ensure a steady flow of expenditure throughout the month. No more expensive restaurants, BOGOF wine deals from the supermarket and a generation of cab drivers who mourn the demise of a man that suffered from some kind of fiscal lycanthropy.

I'm just concerned that in applying this degree of sensibleness to running, and in particular, racing, I might have killed something off. Some spark might have been extinguished. Some fire doused....OK, enough of the firefighting metaphors, I promised not to discuss my employment within the pages of this blog anymore.

Since the D33 I gave my lower back seven days to repair and have now returned to training. There was an easy run out on Sunday with a few hill sprints; a 40 minute static bike session on Monday followed by some 'down in the basement' squats on the Smith Machine; then a 70 minute treadmill session yesterday involving eight x four minute hill reps at an incline of level six. Today will see me out for an hour out with the running club.

That, Dear Reader, is no 'King for a Day, C*unt for a Month' training plan. No, Siree, that is full on, balanced, 'Race like Bragg' exercise strategy.

If the D33 was a test, it was something of a failure. Yes, I avoided the dreaded DNF and achieved a personal best, but I was expecting something better. The next test is the Highland Fling which is about a month away. The last time I ran that race competitively I attempted to chase down a crazy burd in a tutu and failed. It's unlikely she'll be running this year so maybe I'll wear the tutu for her. 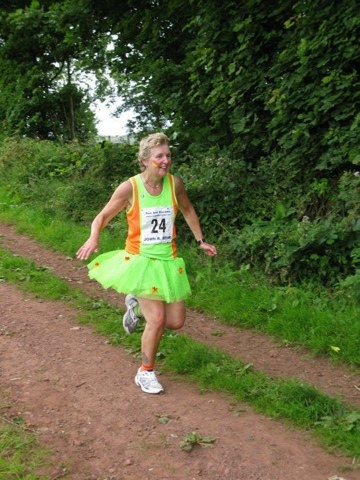 Posted by Subversive Runner at 10:12

when I said I was looking forward to your own observations of the training, this is also what I was referring too i.e. not just the good stuff.

My last post pretty much sums up where I think training takes most of us and is concluded by saying you've either got 'it' or you haven't - when it comes to running long.

The law of diminishing returns is massive for those with class but for me it's negligible. I'm mightily pissed off that it took 4 yrs of injuries for the penny to drop.

I sincerely hope this isn't the same for you. I can think of one glimmer of hope though; something all coaches say is that you should pay no attention whatsoever to any performance except the one you trained for.

For you this surely means that you are going to have a great WHW race 2013?

Thanks Dale, I appreciate your thoughtful comments. The only real test will occur at the WHW. Let's see what happens there. See you in about a month.

Don't think too much Dave. We just have to remember that what we do is time-consuming, expensive, exhausting, environmentally questionable, often anti-social, potentially dangerous and totally devoid of any conventionally quantifiable benefits. One should not look for deeper meanings.

Thanks Andy. Thinking is a curse that has afflicted me for many years. I've attempted to dull it by failing miserably in the defensive techniques of boxing and quaffing much 14% vino. But thinking still occurs. The thing is I know you think deeply too :-)

bang on the money there mate

Nice one cobber - love a man with a plan - if you wear that tutu, I will have a jelly baby for you

Don't see how you can run it in anything but a tutu this year.

Is a jelly baby some sort of regimental slang for man-on-man action in the Scottish mountains or does Keith just wander around with a bag of sweets in his pocket on the ready or am I thinking too much?

Finally caught up with your blog now I'm back on my laptop without parental blocks.
When I was cooped up I had a brilliant idea, I'll tell you about it on Saturday.

Woohoo. Now you need to put you money where your mouth is. Wearing a skirt twice in month... :-)x