How To Avoid An Unfortunate Event Free Future

I'm sitting on a Virgin Pendolino from Glasgow to London without my four-legged travelling companion. He's staying in the Land of Jock as I'm about to embark on a trans Atlantic adventure - more of that in a while.

Despite feeling like I've had my right arm removed it's no doubt a good thing that Mason (dog) remains with Mrs Mac. The poor little fella has completed more train journeys that Casey Jones so remaining surrounded by skirt wearing men but free to roam is preferable to being banged up on one of Richard Branson's loser cruisers.

My short time in Scotland was highlighted by a day out on the West Highland Way where Mrs Mac and I went to check on a memorial post to a departed friend and a secret cache that exists just off the Way. The cache contains a visitor's book and an order of service from our friend's funeral.

Our West Highland Way trip began with a drive to Beinglas Farm where we changed into running attire before setting off in a southerly direction toward Loch Lomond. Now, I'm not a fella that usually feels the cold but a chilly nip about my knackers dictated a pair of Lonsdale trackie bottoms over my running shorts. This particular garment is OK for looking cool in the boxing club but lacks the Max Wall tightness that allows free movement in the leg department. The result was that I bimbled along the path slowly rather than ran (I hate the term but it's true....I was more jogger than runner).

Mason (dog) skittered about until deciding to carry a log that was bigger than him which gave him some purpose. Mrs Mac plodded along at a decent pace despite complaining that her running had been more dormant than Vanessa Feltz's gym subscription.

After a short while we arrived at Dario's post where we posed for a couple of pictures. The post, now a couple of years old, remains in good nick. Six months ago some arse-wipe decided to give it a bit of a kicking but failed to dislodge it. The post's resilience is testament to the 20kg of post mix that Tim Downie, Mrs Mac and I used to sink it during a clandestine operation back in 2010. It appears that no more attacks have been visited upon the memorial apart from the name 'Vincent' being scored into the post's lead cap. Vincent, if you happen to be reading this, you are a knob.

At this point the sun had cleared the sky and I was sweating more than a gerbil in a gay bar, so I whipped off the trackie bottoms and set my legs free. We set off again and I immediately felt like Usain Bolt after drinking a rather large espresso. I surged over the rocks and roots an leaped over puddles like a hurdler on speed. At least that's how it felt in my mind....in reality I was probably moving like David Blunkett on ice.

We reached the secret cache to discover it free from its hiding place. After checking the contents were dry and signing the book, we carefully re wrapped it and I set about giving the cache a coat of winter camouflage. The rocks that once covered the cache were scattered about so I replaced them carefully. It was then that I discovered precisely why the secret had been discovered. Someone had chosen the spot to make like a bear in the woods and had used the rocks to cover their movement. A movement that was now stuck to my fingers along with some decaying toilet tissue. Nice.

A visit to Doune Bothy where fresh water and some antibacterial hand wash were available prevented the likelihood of contamination by some pathogenic virus then we were off again.

Our return to the car a couple of hours later chimed with the setting sun and a dipping of the temperature. All in all it was a fine day out on the Way and a healthy precursor to the trans Atlantic adventure mentioned above.

Tomorrow I head to Miami for four days with eleven friends to celebrate the retirement of my Borough Commander, Nigel. Yep, you read that right.....Miami. For four days. For three of those days we are required to wear fancy dress. So I have a bag packed with a few items of sensible clothing plus a toga and associated accessories, a kilt, and a set of surgical scrubs.
Oh, and then there's the planned snorkelling trip in an ocean that teems with sharks and other marine predators. 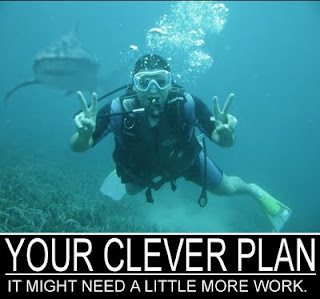 The trip has the potential for being messier than my hands after discovering the human shit earlier this week. Mrs Mac has stated that she can think of nothing more hazardous to an unfortunate event free future than twelve middle-aged drunken men dressed like idiots in a country where the law enforcement agencies don't take too kindly to British humour.
Laters (I hope).

Posted by Subversive Runner at 13:02 4 comments

This blog post provides something of an update to the resurrected offering that was discovered among my sent emails. That particular post was written in March 2011 by a man about to encounter major change in his life; the sharing of his self and home with another adult; the landscaping of his garden and a makeover to his decor; and a possible uplift in his running.

It seems that some of my readers (well, at least one) were confused by my reposting an 18 month old offering. Let me make it clear:

1. My garden never did get sorted.
2. I still need to get busy with a paintbrush.
3. I'm no longer 'a man with a successful career in the fire service.'
4. Mrs Mac turned down the job she secured in the beautiful south to spend the next 18 months tirelessly job seeking in Scotland.

Regarding point 4, I'm interested in this oft heard claim that 'you should feel lucky that you have a job.'

Let me put you right about that: Most of the idiots you hear quoting that refrain are the same that complain about work-shy benefit scrounges. Get this, you can't have it both ways. Either society depends upon its citizens working and playing a role, in which case a job of work is a basic human right; or employment is a condition of fortune, in which case you have to accept that those without paid work need to be supported.

Anyway, that bit felt a bit heavy so let me cheer things up by telling you a tale of an intelligent
university educated woman with excellent social skills who found herself the victim of the coalition's cuts agenda and made redundant from her job.

She never gave up, she accepted knock back after knock back but stayed on her feet. She kept busy creating a successful ultra marathon and creating things of beauty from wool and cotton. She also travelled to London to deliver health intervention messages to young, disaffected young people in deepest, darkest Battersea. Imagine a dozen or so young men of South London, some the size of brick outhouses, mesmerised by a bespectacled Scottish woman and lapping up the information she had travelled to impart. Remarkable.

Last week, after 18 months of disappointment, she secured a job as an operative in the 2014 Commonwealth Games.
Well done, Lee Maclean. You deserve the 150 positive comments you received on your Facebook   page and you will be a success in your new role.


Posted by Subversive Runner at 20:52 3 comments

Time served readers of this blog will remember the en masse cull that I performed 18 months ago when three years worth of blog posts got flushed down the loo like a junky's wrap when the Old Bill come knocking.

Well, I was at work today trawling through my sent emails looking for something regarding an attendance at the Annual Service of Remembrance in Battersea Park. While hundreds gather at the Cenotaph in November a rapidly depleting group of former servicemen and women gather around the plinth in the Park to remember the residents of SW11 who paid the ultimate sacrifice. I like to ensure that the local fire station recognises the debt we owe them and its personnel appear alongside those on parade. Anyway, in searching for that email I discovered a number of saved blog posts from the 'lost' series.

As I read through them memories came flooding back and I've decided to post one here to show how you never know how something might occur to mess up your life plans.

‘Another turning point, a fork stuck in the road.
Time grabs you by the wrist, directs you where to go.
So make the best of this test, and don't ask why.
It's not a question, but a lesson learned in time…’

And so it feels that I’m rapidly approaching one of those forks stuck in the road.

More of that in a while.
As I look back at the past four years, since I separated from ex-wife/partner (no.3), I see a directionless period of time marked by chaos and self destruction. When the time comes for my eulogy to be written, the period 2007-2011 will be known as ‘The Wilderness Years.’ Either that or ‘The Four Year Period When a Man With a Successful Career in the Fire Service Became Famous For Being a Pirate Whilst Simultaneously Having a Fuckin’ Good Go at Draining the European Union’s Wine Lake.’

In searching for metaphors for my life I’m required to look no further than my wildly overgrown garden and my long undecorated house. But do you know what? I could live with the slowly deteriorating décor, the flaking paint and peeling wallpaper, because I knew it was easily within my grasp to turn that around.

My fingers are the colour of London Stock Brick rather than Monty Don green. In fact I kept my sitting room curtains closed so I didn’t have to witness the bio-diverse ecosystem that was developing outside my widow. It got so bad that I was even too embarrassed to employ a gardener to tackle it (not to mention the extortionate sum it would cost to level what was essentially a forest).

Then last week Mrs Mac arrives on a short trip south and in a matter of hours the garden is (partially) transformed.

And right there is the fork stuck in the road.

Not the dawning realisation that my life is destined to be one dominated by weekend jaunts to the garden centre and Gardener’s Question Time…..I mean, get real.

No, I’m talking about the one-time running club president and soon to be unemployed Mrs Mac.

For she learned recently that her employment is about to become a victim of the coalition’s cuts, which for her, became her own turning point in the road. It motivated her to make the decision that employment opportunities are greater in the beautiful south plus there’s a deteriorating garden, surrounding a deteriorating house, that contains a deteriorating man, that needs rescuing.

Yep, me and Mrs Mac are about to move in together.

By way of justifying the title of my blog and its raison d’etre, I wonder what this will mean for my running.

Well, one of two things I guess.

Whichever one holds true the tattoos of memories and dead skin on trial will be recorded within this blog.

Posted by Subversive Runner at 21:18 5 comments