Fail to prepare and you prepare to fail; that's what they say, right? Well, there could be no failing this week so preparation took a front seat. With a works Christmas do which required attendees to dress in a James Bond theme in a hotel in Farnham; sixteen boxers to weigh and confirm their fitness to fight; a mad-cap dash to Weymouth for a birthday celebration (yep, as I sit and type this, single fingerdly as typing was never gonna be a requirement for any employment likely to come my way,  I've hit true middle age- 45. Ugh!) ;and an extravaganza of pugilism at the Clapham Grand, there could be no failing allowed.

Unfortunately, planning for Marcothon slipped off the agenda so a failing occurred. Run for 25 minutes or three miles every day in December. Fail.

I suppose if I had been that motivated or that ruthless in my planning I could have fitted in a 25 minute run around the streets of Battersea after preparing the Clapham Grand for the boxing and before the doors opened. But I didn't. Instead I went to the pub with Darrel Wilkins Jacobs, an Anglo-Indian colleague of mine who once graced the posts of this blog with alarming regularity. That evening Darrel was to be the MC at our boxing show. 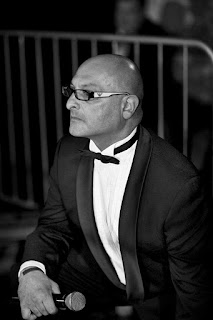 Due to his absence you may have mistakenly believed that Darrel Wilkins Jacobs had suffered some terrible fate and perished. That's a fair bet to be honest, after all, a man that decides he's gonna set out from Fort William in a pair of flip-flops and trek his way to the airport is likely to suffer blisters and exposure at best. Then, after enquiring at a petrol station as to the distance involved, and to be told 100 miles, then deciding that a Bombay Bad Boy Pot Noodle and two KitKats will be sufficient sustenance, is almost definitely making A&E rather than Glasgow Prestwick. ﻿

But no, Darrel Wilkins Jacobs lives!

So Marcothon got shelved and me and Darrel went to the pub. We were dressed smartly, me in dark grey suit and regimental tie and Darrel clad penguin-like as pictured above. We walked into the Slug and Lettuce to be greeted by the sight of many thirsty individuals that had aims of being spectators of pugilism some time later. Many of them we recognised as colleagues.

A certain individual sat at the bar with three friends that were unknown to us. He, on the other hand, was recognisable as an Asian firefighter that stands by at our fire station occasionally.

'Hey, Darrel, how you doing, man?' enquired the Asian firefighter. I could detect a perception of some unspoken, racial brotherhood from the guy. Unbeknown to him Darrel is more Delboy Trotter that Dev Anand.

'You're looking smart but why are you dressed like that, man?' asked our friend.

'I'm just about to start my shift at the local curry house next door mate. I do a bit of part-timing there to make ends meet.'

'Really? Wow! That's good. It's funny because we're on our way to a boxing show and you look like one of those microphone dudes! Maybe we'll pop in for a meal afterward, a few extra popadoms on the house, eh?'

I managed to supress my laughter quite easily. After all, I've had many years of witnessing Darrel Wilkins Jacobs reel in the gullible and easily duped. He recently convinced a German film crew and a number of international Urban Search and Rescue (USAR) teams that he's a USAR snake charmer and rids international rubble piles of poisonous serpents before the USAR teams get to work. He told them that snake charming has been in his ancestry for generations and he puts his skills to use for the benefit of rescue workers. This happened in Texas where rattlers and other nasty reptiles are abound.

It was as Darrel played an orange plastc recorder to the expectant massed ranks of American and European search teams, and the German film-makers rolled their cameras, that a rubber snake was encouraged out of a colleague's breast pocket by a length of invisible fishing line, and around fifty USAR operatives and a German film crew were introduced to the world of Darrel Wilkins Jacobs and the letters N-A-I-V-E.

So I guess I'm saying Marcothon got shelved but I had the joy of witnessing another classic performance from the snake-charming, popadom serving, Bombay Bad Boy.

Oh well, I might pick it up again before it gets too late.

At the very bottom of this post I've attached a video of Darrel in action (MC-ing.....not snake charming or waitering).
Laters.


Posted by Subversive Runner at 14:11

I remember Darrel setting off from Fort William in his flip flops, and disappearing off the scene somewhat like Reggie Perrin's departure.

Will Darrel be resuming life amongst the family? Or retreating offstage for the next 4 years or so?