I've been absent from blogland recently. It's not the first time this has happened. In the past I've shut the thing down, taken a break for a holiday or gotten so fucked off with wittering on about myself that I can't stomach tippy tapping into the small box in front of me.

But my most recent venture into the wilderness has more to do with posting far too much of my comings and goings into the internet and creating such a momentous online profile that anyone can pretend to be me. Why the fuck they would want to do that I can't imagine. I guess the stolen identity would come without the chronic athlete's foot, hairy back and propensity for putting ones foot in ones mouth, right enough.

So instead of blogging I've been throwing my literary efforts into creative writing of another type. A couple of years ago I began to write a novel; it's a ghost story that involves a London firefighter being visited by the ghost of a young girl that died whilst being rescued from a crashed car. It's been stuttering along for the past year or so after a storming start but the complete tale exists in its published form in my head. Unfortunately it shares space with all manner of bizarre thinking and decision making so is struggling to see the journey from brain to written word.

Then something happened a couple of weeks ago that became such an issue for me that it made me want to don metaphorical hobnail boots and stomp all over it. Advice from a close friend encouraged the removal of said boots and replacing them with ballet pumps. This I did and I kept my thoughts and comments to myself. However, I found an outlet for my angst in creative writing and am presently engaging with the individual that annoyed me so and I'm properly spoiling that person's day (in the written word). The names, places and events have all, of course, been changed to prevent embarrassment, legal action and dog shit through my letter box but it's an Irvine Welsh-esque short story of delusion, intoxication and tartan.

As I become all arty farty and plan to move to a remote, coastal retreat to pursue my craft I was persuaded today to indulge in other arty farty pastimes. I was told that the location for the first pursuance of this sophisticated indulgence was the Kelvingrove Art Gallery and Museum and the subject of the visit was to be Salvador Dali's 'Christ of St John on the Cross.'

Apart from the ones that appear in top shelf magazines I've never really been one for looking at pictures and stuff. And as for artists.....well I'm familiar with the work of Mr Rolf Harris but beyond that I'm pretty much Scoobied. So a quick internet search of the gallery reveals a licenced cafeteria within its walls. Ya dancer!

We arrive at said establishment perfectly timed for a spot of lunch and we head off to the cafe. A nice meal of Italian lamb stew and gnocchi in mushroom sauce, washed down with a few beverages, and I'm set up for a fierce engagement with something a little stronger. Then I'm reminded that we're there to look at a picture.

I'm dragged out of the cafe and the at-home feeling of a healthily stocked bar, past paintings, statues and all that other kind of stuff you get in a gallery, up some stairs and into a darkened room.

Then I see this: 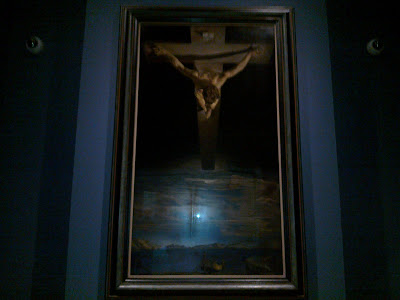 'The perspective and viewpoint for this work is obviously intended to be both celestial and omnipresent at the same time. This is due to the overhead positioning of the viewer at the top coupled with the lateral viewpoint of the earthbound scene at the bottom.'

Mrs Mac looks at me, mouth agape and speechless. I whisk her off to the gallery's shop, buy her a framed print of Dali's masterpiece and before you can say 'online-art-research' we're in the pub with a cool pint of Arthur's Black Gold for the gentleman and a Babycham for the lady.

I breathe a sigh of relief, Mrs Mac marvels at the artistically endowed individual in front of her and all's good in the world.

Oh yeah, I've been doing a wee bit of running lately too but I've made you sit through this arty farty bollocks so I'm not gonna push my luck with that boring old shite as well.

Posted by Subversive Runner at 20:23 1 comments